Why you Should Learn About Survival Hunting

During ancient times, hunting was the only way that our forefathers could put food on the table for themselves and their families. Times have changed a lot. Nowadays, people work in offices to make ends meet. Regardless of modernization, hunting has not yet lost its relevance in society.

In fact, hunting is regarded as a survival skill as well as a sport. Have you ever asked yourself what would happen to you in case you ended up in a place where there was no food?

You would certainly die from starvation. Knowing how to hunt can increase your chances of survival in case you find yourself in the middle of nowhere. If you are an experienced hunter, you will be able to survive by slaughtering by feeding on animals that live in forests.

Here is a list of reasons why you should practice survival hunting before the situation comes calling.

Hunting is not complicated like rocket science. You can perfect the skill by practicing more often. Besides that, you have to invest in hunting gear such as crossbows and scope.

Having such tools will make it much easier to take down your targets. For instance, a crossbow that’s coupled with a scope or a red dot helps you in making accurate shots which in return guarantees you will never return empty handed from any hunting expedition. You can check out various types of hunting tools that are on sale here.

It’s said that a desperate situation calls for desperate measures. Anyone that has been hunting for more than a decade will tell you that every situation presents itself differently.

This means you will not be doing the same thing every day. You will actually have to summon your creativity to increase your chances of hitting the target. For instance, if you get lost during the hunt, you are able to figure out your location by simply observing the position of the sun. If you get lost after the sun sets, you will be guided by the north star.

Additionally, if the weather is too windy, you will have to figure out how you will angle your weapon to avoid missing the target. The most important thing is that you will learn how to use the hunting tools to protect yourself in case of an attack.

#3. Teaches you Aspects of Nature

There are some things that you can never learn by watching documentaries on National Geographic. You just have to get out there to experience them. Hunting actually brings you much closer to nature than you can never imagine. And by that, it teaches you how to differentiate various aspects of nature.

For instance, you are able to identify the trails of your favorite game. You will also know how various animals behave when they are in danger.

#4. Teaches you to be Patient

As a novice hunter, you might think that you will get in the woods for a couple of minutes and catch something to keep you going for some days. On the contrary, it actually takes time to catch up with your target.

Remember that the deer is not waiting for you. It’s obviously on the move, and you have to track it down. And even after spotting it, you must make a well calculated move or you will miss it.

This means that you must learn to be patient during your hunts. If you are not patient, you will end up wasting your arrows by shooting when you shouldn’t and vice versa. By the rule of thumb, you should strike your target when it least expects you to.

When this virtue of patience is exercised for a long time, it teaches you to do the same in other areas of your life.

This one obviously sounds weird but it’s the plain truth. Hunting in general helps in controlling the population of dangerous animals. Dangerous animals here don’t refer to polar bears or tigers.

Research shows that the majority of road accidents are caused by deer as they cross the road. Hunting such animals can help in reducing their population which in return makes our road much safer.

In other words, it prevents a human-wildlife conflict from arising.

Chasing wild animals around helps you in burning excess calories. Even if you don’t catch anything, moving from one point to another will certainly make you shed off a few calories. Besides that, walking or running through rough terrains tends to tone your muscles.

And that’s not all. Game meat is much healthier than the meat we buy from butcheries. This is because wild animals feast on natural food that’s free from chemicals. In fact, game meat has low levels of cholesterol than animals that are domesticated. 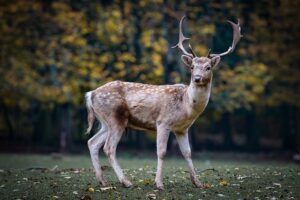 Improve Your Hand-Eye Coordination with These Games and Bar Sports