Home » Computer-Internet » Games » You are reading »

Best NES Emulator for PC: Nintendo DS Emulators for PC can let you play those all-time favorite Pokémon games on your PC.

The world of gaming has transformed from on-field to on-screen mode for a very long period. People today rarely have time to invest in the physical exhaustion that is caused by playing outdoor; as they are already tired of mental exhaustion from work pressure. Hence, they need mental relaxation without physical exhaustion which has become possible only by the virtual platform of gaming. One such most popular handheld game was the Nintendo DS. Here, we will discuss what Nintendo was in brief, why it was banned, and what the most exclusive Nintendo DS emulators for PC to play Pokémon games are.

Nintendo DS is one of the most popular handheld consoles of all time. Nintendo DS has an equal iconic value of that of the PSP and the Game Boy. Nintendo DS was sold more than 150 million copies or units before its stagnancy in 2013. However, users still find themselves on the playground of those popular games, with the help of the emulators. Nintendo DS emulators are not many in hand since the process of manufacturing is still in progress; however, some of them are there with which games like Pokémon (Black and White), Mario Kart DS, The Legend of Zelda, Chinatown Wars, Metroid Prime Hunter and more are still in a special place for the Nintendo DS users along with the younger generations of users.

Hence the emulators for playing these games hassle-free are required in the user’s PC.

Why and when does this stop performing?

Nintendo DS has been ceased in 2013. From then, the initiative to create emulators that support Nintendo DS games to help the players play easily has been on a slow ride. Hence, there are not many Nintendo DS emulators to help the users play the above-mentioned games including Pokémon (Black and White).

Here is a list of the 7 best Nintendo DS emulators for PC to play games like Pokémon (Black and White) on devices like the user’s PC.

For Windows and Mac, DeSmuMe is one of the topmost emulators opted by users. However, the name of the emulator might be a little weird; and the pronunciation might be weirder. But then what is there in a name as long as the purpose is solved. The most exciting feature of this emulator is it is still in progress-hence it is open-source. Games with maximum graphics are played very smoothly on both MacBook and PC with the help of these emulators. However, the performance of the emulator highly depends on the configuration of the user’s PC. Hence, the same emulator can work ad satisfies the users on different levels depending on which device they were using. The user can also customize the graphics and emulation settings as well. Some other perks of using this emulator for your PC games are to avail of other exclusive features of cheat code manager and USB support. Also, it freezes the game where the users left at the last time and give the option to restart from there, whenever they start playing next.

Talking about the best Nintendo DS emulators, one of the first names that turn up in the mind of the ultimate gamers is MelonDS. It has been so good so far that often the users remain confused about which one to download and use- DeSmuMe or MelonDS. Now, this emulator is a bit different, rather advanced than that of the DeSmuMe. It provides the user with advanced modes of emulation and graphic options. Also, rendering the DS games with high accuracy is another salient feature of this emulator. There is a program named OpenGL render in this emulator. It helps the user to enjoy the games in their highest resolution even if the device they are playing from is not compatible with such a high rate of resolution. Similarly, another function of the new JIT compiler turns the emulation the fastest.

If the gamer wishes to particularly play Pokémon (Black and White) on PC, MelonDS is the best emulator to apt for. While playing multi-player games, MelonDS allows the device to connect to the local Wi-Fi. However, the provision is there for some specific games; however, seeing it working is a win-win situation for the gamers.

NO$GBA started as a popular emulator to gamers who were addicted to Gameboy advanced games. However, it still comes at a higher rank as effective emulators of Nintendo DS games. The most important feature of this DS emulator is it supports three forms of games-GBA, Nintendo DS, and Nintendo DS Lite (DSi). However, the weak point of this DS emulator is that it is very limited when it comes to graphic settings. However, if the users know the tweaks in the settings, they will be successful to enjoy better game graphics than that of DeSmuMe. Perks of using this emulator for Nintendo DS games are its fast performance even in slow performing PC and it requires a little number of system resources. There are some red crosses as well; the screen layout features are limited; the multi-player option is also experimental. However, the rest of the features make the emulator one of the best to perform in Nintendo DS games.

If the above-mentioned Nintendo DS emulators are products; this is the category; an umbrella term. RetroArch supports as an emulator to all the retro consoles. It is an ‘all-in-one emulator; the creators behind wanted to create an amalgamation of all sorts of cores aka emulators in one particular software. The different Nintendo Consoles that can be emulated and controlled through this emulator are SNES, NES, DSi,3DS, DS, 64 along with MAME, Atari, and many more. The pullback part is the interface. In the beginning, the fresh users might find it a little less user-friendly as it is a little bit complicated. However, with 2-3 times of rigorous usage, it becomes smooth to use. Another thing to mention is playing games is a bit harder here than the other mentioned DS emulators. Hence the advice is not to use this emulator if the gamer is at the beginning level. With all other necessary and standard graphic and emulation options, it can enhance the video quality of the game to 4K and let the player enjoy it even when the system does not support such high resolution. It also applies exclusively, shaders to change the look of the game screen. The biggest drawback of this all-in-one emulator is it is too voluminous and spacious than it requires being.

Similar to RetroArch in emulation options and supported consoles, OpenEmu is the other famous front-end software for console emulators. The biggest plus point of this emulator is its super smooth and user-friendly user interface (UI). For a Mac user, it would be as same as iTunes. On the interface, the user will find the box art forms of games, sorted by the platforms; hence it is easier for the users to find their favorites. For the Nintendo DS games, this emulator comes with a DeSmuMe emulator. One of the turndown points for the users is the lack of graphics settings; neither there is an enhancement of internal resolution. A big list of controller support like Switch Pro, Wiimote, DualShock is there. Hence, as per the contributories, OpenEmu is best for Mac devices; and not for Windows devices.

Citra is a special emulator; it is capable of Nintendo 3DS console emulators. For the Pokémon (Black and White) games on PC, Citra is the finest and smoothest Nintendo 3DS emulator. It works fine even in a system or device that is of mediocre quality. With this in the system, one can run different 3DS titles with high resolution and full graphics. As the emulator allows the user to enhance the internal resolutions up to 4K, best for The Legend of Zelda and Pokémon games; it is becoming the prior choice for the users. On Citra’s official platform, one can check the list of Nintendo 3DS games and PC emulator configuration compatibility before downloading. One of the most prominent features of this software is it has an ‘in-house screen recorder’. Also, it is local Wi-Fi compatible as well as multi-player supportable.

As Nintendo DS is one of those games that are handheld, it is quite natural that gamers eagerly want them in their Android handsets like smartphones. Hence, this DraStic DS emulator puts itself a level up by making itself available for Android users as well. All the features of this emulator are as same as that of other Nintendo DS emulators. However, the efficiency goes better with better configuration devices. It contents six different layout options. The only reason why users step down from using this app is that it is not free of cost; the app comes at $4.99.

Above are the best Nintendo DS emulators that the users can faithfully use to enhance their experience of gaming to the topmost levels. They are perfect for high-resolution games, the recent sensation; also to go nostalgic with the games that have made your childhood days golden. 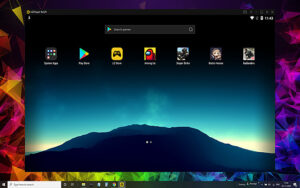