I’ve never met anyone indifferent to seafood. There are those who don’t like it or beware of them, those who are ready to eat them as often as possible, but there are no people that wouldn’t care whether to eat a slice of bread or a fresh oyster. The reason is that seafood is a real superfood that combines the taste of exquisite delicacies and the benefits of the healthiest products. Seafood doesn’t make you fat, improves your health, and prolongs your life, but we eat it, firstly, because it’s delicious.

As you have already guessed, I am one of those who literally go crazy for seafood, and it’s so unfortunate that the freshest seafood directly from the water is not the most affordable food. And although not much compares to it, trust me, you can cook culinary masterpieces from frozen seafood as well. And today I would like to offer you a selection of my favorite seafood recipes, from squids and mussels to shrimps and scallops. Let the sea be on your plate as often as possible.

It won’t be too insincere to say that Spanish “gambas al ajillo,” fried shrimps with garlic are the best thing that can happen to shrimps at all. Delicate, exhilarating garlic aroma shrimps are the perfect tapa that can be found in almost every tapas bar in Spain, and that’s because it’s not hard to cook them, the result is always stunning, and the rest of the aromatic butter is delicious to dip bread into. In the historical homeland, such fried shrimps are served in clay “cazuela” bowls, and the oil is sizzling devilishly you are scared to burn yourself, but once you try it – no one can pry you out with a crowbar.

Pasta and seafood are literally created for each other, any Italian will admit. And although the variety of all kinds of inhabitants of the Mediterranean Sea is shocking, crabs cannot be found there, so there are no traditional, classic recipes of pasta with crabs in Italy. Well, that’s not a problem, let’s invent our own recipe!

I’ll explain the concept. We will not cook crab meat in any sauce, creamy or tomato – after all, you don’t have a crab on the table that often, so when it happens, I want to taste crab meat, not sauce. Therefore, there will not be much of a sauce – instead of a puddle spread on the bottom of a plate, it will only cover the pasta, and the taste will be thin and tender. And in order to not surprise your guests with this apotheosis of delicacy and halftones, we will sprinkle a tender meat and crab paste with crispy crumbs with explosive taste, and that’s going to be a blast! The contrast will turn out to be the right one – both in texture and taste.

So, from time immemorial, fishermen cooked mussels – made a fire, splashed some wine in a pot, cut vegetables there (if they had them), poured some mussels in there, and in about 5 minutes a dinner, simple and modest, was ready. Now this recipe is called “moules marinière,” fisherman style mussels, and its highlight is still a pure and solid taste of fresh seafood which is only slightly shaded by white wine and vegetables.

For this, any mussels in the shells will suit, ideally fresh, but frozen will be fine too. In Belgium or France, a portion of French fries will be served to a saucepan of such mussels, but if you are too lazy to cook it, you can fry a fresh baguette real quick and then use it to get all the delicious sauce from the bottom.

If we talk about real summer pleasures, then there is little that can be compared with street cooking. What whets your appetite stronger than fresh air, fire, overflowing birds singing, and a juicy piece of meat? But the grill is not only meat, and this simple thesis can be a real discovery for those who do not think of a different meal in the open air, except pork steaks.

So, fish and seafood are the best candidates for grilling which is well known to the inhabitants of the Mediterranean. In French this seafood dish is called “plateau de fruits de mer.”

Scallops with pumpkin and couscous

I will not beat around the bush: most readers will find this recipe difficult because the new and unusual is always perceived like that. It can be a long time to explain that actually cooking these scallops is much easier than dumplings, not to mention borsch or cabbage patty-cakes, but your mind will not be changed anyway… Therefore, I will put this way – every minute and every effort that brave souls spend on this recipe will pay off a hundredfold. At the same time, let’s see if it makes sense to cook a pumpkin in sous vide if it is turned into a puree after that anyway.

So much has already been said about the endless benefits of sea proteins that I will not repeat. Yes, doctors and nutritionists continuously sing seafood laudatory songs in unison, and squid, of all sea reptiles, is the most inexpensive and affordable. And the most understandable too – if you have heard at least something about squid, you probably know that in order for it to be soft, you need to cook it for no longer than 5 minutes or less than an hour.

I usually prefer the first option, but this time I decided to go the other way, and I didn’t screw it up: slowly stewed in the oven or flat top griddles , squid becomes incredibly soft, and melting juicy tomatoes turn into either sauce, garnish, or an integral part of the dish, certainly homemade, but so delicious that it would not spoil a festive table.

A simple and tasty way to cook shrimp? Racking your brains has no sense – all you need is a lot of shrimp, not less olive oil and garlic, parsley, white bread and, of course, a lot of wine. In a double boiler, you can cook completely different but also very tasty shrimp – incredibly juicy, fragrant, with a rich taste which in other combinations fades into the background.

At first glance, the idea of ​​steaming shrimps may seem like dietary nonsense. But no one thinks of such shrimps as boiled, and this is despite the fact that they give part of their taste to the water in which they are boiled! It turns out that if you want to make delicious shrimp with shrimp flavor, then there is no particular alternative to a double boiler. The tautology and paradox in the previous sentence will be the seasoning for this recipe, and the green mayo (if you want to mess with it, of course) – for shrimp itself.

Scientifically, they are called “Gastropoda”, simply – sea snails or limpets, and in Madeira, where these shellfish are considered a local delicacy, they are called “lapas.” In fact, limpets are found not only on a remote island in the Atlantic Ocean but also in the Black and the Mediterranean Sea where they dwell on coastal cliffs.

To tear off a mollusk from a stone, which clings to, takes a lot of effort – the slightest touch – and the limpet is pressed against the stone, so hard that it is almost impossible to get it off without a knife. But what to do if there is no (and will never be, in the nearest future) any sea or gulf with limpets near your house? The answer is simple – you can cook mussels which, unlike limpets, can be bought frozen.

To be honest, this recipe will not work for everyone, and not always. It’s not about its complexity, it’s just that the freshest shrimps are rather a wonder for some people, and not just something habitual or regular. Choose the best shrimps you can get – I cooked the carpaccio in Italy, bought bright red shrimps (I think, I had the same in Spain called “carabineros”). But if there are only frozen shrimps available, you shouldn’t be afraid either, at least, any concerns about eating raw shrimps disappear with freezing them. The main thing is that the shrimps are tasty, and we can easily emphasize this taste with no problems.

Of all the products, I love sea inhabitants, and scallop is one of the most worthy representatives of this glorious tribe. Previously, scallops could be bought only in special stores, but now large frozen scallops are in most local grocery stores. Many, however, avoid buying scallops because the cost is high, and it’s unclear what to do with them. The secret is that there isn’t anything special you have to do with them, the main thing is not to spoil the good product. For example, I decided to make a tartare – and it was incredible.

Author bio: Author bio: Roy Emerson is a technology enthusiast, a loving father of twins, a programmer in a custom software company. Editor in chief of TheHomeDweller blog, greedy reader and gardener.

Benefits To Eating Only One Meal Per Day 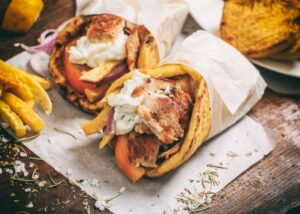 Interesting Info About The Best Souvlaki In Melbourne

« Why Make Use of Vidmate To Download Videos?
How to Recover Your Lost or Deleted Pictures & Messages on iPhone iPad Easily »