Eco-friendly Gifts that are Sure to Bring a Smile

It’s gift-giving season once again. During this time, some important things tend to take a backseat to the festivities. Our diet and the environment are usually the first two victims of the holidays that feature conspicuous consumption. However, the truth is that neither has to suffer.

There are many items that don’t use power, don’t need batteries or plugs, and never need a recharge. Some products do use power, but combine many items into one, thus having a lower environmental impact. And some items are so compelling and well-made that they last for a long time and get passed down from person to person. Here are examples of each:

Skates, Bikes, and other Human-powered Transports

If you’ve ever seen those neat cruiser skates that have been making the rounds, you will understand why skating is making a bit of a comeback in parks, bike lanes, and college campuses. The new models are a cross between roller skates and in-line blades.

Strapping wheels to your shoes enables you to get where you are going quickly without cheating you out of valuable exercise. Best of all, the activity requires no fuel other than that which is provided by the skater. Just remember that falling while learning is a hazard you will want to minimize. So be sure to pick up a set of knee pads, elbow pads, and wrist guards.

For those who have trouble mustering the coordination for skates, or who just don’t have the knees for it, there is always bicycles. They are also on the rise, especially in urban areas where driving is less desirable. Hybrid bikes that give you a needed boost up hills are still very low-impact for the environment. And due to advances in technology and engineering, bicycling has never been more fun.

The modern smartphone is the Swiss Army Knife of consumer electronics. The tablet is a less pocketable version of the same. They are environmentally friendly because of all the other products they eliminate, not just because of their innovations in energy efficiency. Here is a short list of things you no longer have to buy due to owning a smartphone or tablet:

When you stop and think about it, there is a surprisingly long list of things replaced by the smartphone. Charged once a day with a single power adapter, the smartphone is one of the greatest energy savers in the history of consumer electronics.

Beyond the smartphone is the internet. We can have international meetings without fueling a plane. We can share photos and videos with as many people as we like without postage or film. With a pen-equipped tablet, you can receive a document, fill it out and sign it, then send it back without either party ever having to print it out. The environment thanks you for such gifts.

Some products have a reputation for lasting a long time. They have a proven track-record. It doesn’t matter if you are getting a pair of sturdy boots or a nice wallet or tote. Just be sure to get the one that doesn’t fall apart and has to be replaced in a year. Spend a little extra for the one that has the reputation of lasting forever. Just be sure to practice good online shopping safety when you are ready to buy.

Human-powered objects, multi-function electronics, and things that last are good for all parties, including the environment. This holiday season, don’t let the environment or your diet play second-fiddle to seasonal festivities. 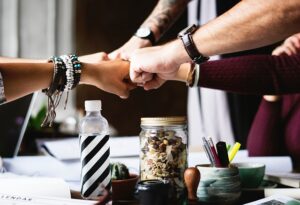